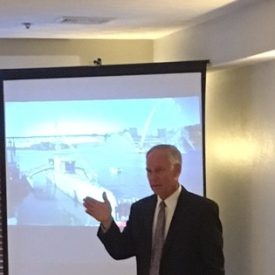 RADM Carr began his discussion by stating that the Defense budget is approximately 2% Compound Annual Growth Rate (CAGR) over time, with absolute spending going up and down, depending on a number of factors.  He presented an overview of US Defense Investment (RDT&E and Procurement) from FY50 to the present, showing that over the decades, while there are significant high and low fluctuations in spending, there has been a steady, gradual increase in overall spending (long term, real growth rate of 1%).  These are the funds that are used for Defense purchasing.  Future projections show a decrease of 43% of spending by FY20 from the last “peak” spending period that occurred around FY 2011 with the U.S. 9/11 attacks.   Overall the “peak to peak” investment points over time have increased in intervals from 18 years to 22 years in length.

RADM Carr spoke of the trend in the subset of expensive, specialized systems for the Navy and Air Force.  While investments have steadily increased since the mid-1990s, the inventory has steadily decreased.  This current trend is very different from previous trends.  In the past, when investments/spending increased, the inventory or “force structure” increased, as well.  When the funding decreased, the armed services tended to reduce inventory.  The entire trend has shifted in the recent 20+ years.  It appears that while funds are available, the force structure cannot be sustained at its current levels; unit costs are much higher, for a number of reasons.

The heart of RADM Carr’s discussion revolved around a profile of “Who’s Funding Research and Development (R&D) in America”, based on data compiled by the National Science Foundation who is tracking where our American R&D investments are being made – identifying government, industry or “other.”  Over 99% of all American R&D investments are by government or industry.  In the 1960s through the l970s, government spending was greater than that of industry.  In the 1960s the government was responsible for 75% of the total R&D spending (with 25% by industry).  Just prior to 1980, the shift occurred, with industry inventing more than the government.  Today, the formula has been reversed, with industry funding 75% of R&D in America, and government only 25%.    This “flip” does not appear to be reversing, nor do the spending lines appear to converge.  The government is not controlling the great majority of technology being created.

The technology that has been generated from these investments has gone from government-purpose investments (pre-1980) to adaptation of civilian technology (post-1980).  When the government invests in R&D, they drive the types of technologies that are being developed for their purposes.  With the shift in significantly more industry investments in this area, the types and purposes of the technologies being developed are not for government use, and therefore may or may not be applicable for mission needs.  Today, the military does not control the majority of technologies being generated in America.  As a result, the government tends to look for technologies that may apply to their needs and work to adapt these technologies to fit the mission requirements.  This shift has stressed the acquisition system and processes for systems development.  Thus, acquisition costs and development timelines have increased, increasing unit cost for procurements.  When industry invests in technology, their window for “return” is typically within 5 years, or they may not be willing to invest in R&D.  With the government’s longer-term cycles, this means that even when a technology could be applicable to a defense need, the shorter industry timeline may not align with the longer-term acquisition/production cycles.

We are at a point where the acquisition processes are “antiquated” and the way our defense systems are developed must be adjusted to accommodate the reality of how technologies are developed and adapted.  The government and the defense industry must figure out how to make platforms at an increased pace, and close the gap between what the government needs and can use, and what the industry is producing.  Increased regulations, increased weight of bureaucracy and more oversight threatens to bog down the acquisition cycle versus making the process faster and more nimble in order to respond to new technologies coming out of industry.

The discussion ended with an overview of the Sea Hunter, an unmanned trimaran designed by Leidos and built for DARPA, to follow an enemy submarine from the surface of the ocean, even in high seas.  Sea Hunters will cost $20M each, acting as robots on the high seas.  Autonomy is a significant trend of the future and going forward the focus will be on technologies developed that enable autonomous missions.

Rear Admiral Nevin Carr retired from the U.S. Navy in 2012, following a 34-year career which included command of destroyer USS Arleigh Burke (DDG 51) and cruiser USS Cape St George (CG 71).  His shore duty assignments focused in Washington on programming and requirements for the Navy’s ship combat systems, weapons, and sea based ballistic missile defense systems. As Deputy Director of Surface Warfare for Combat Systems, He was responsible for requirements governing all Surface Navy combat systems, weapons, sensors and data links, and worked closely with counterparts in Australia, Canada and the UK to achieve system commonality and requirements harmonization. As Deputy Assistant Secretary of the Navy for International Programs, he helped build international partnerships through training, cooperative development, and Foreign Military Sales.

In his capstone assignment as Chief of Naval Research, he led 4,000 talented scientists and engineers executing the Navy’s $2B Science & Technology effort, and drove a government patent portfolio ranked #1 in the world by IEEE.  As Chief of Naval Research, he worked closely with industry, academia, major research institutions, and international partners to develop emerging and disruptive technologies including Directed Energy, Autonomous Systems, Human Augmentation, Electromagnetic Spectrum Dominance, and the Electromagnetic Rail Gun. He doubled the Navy’s previous support of STEM outreach activity to $150M, and worked actively with schools and organizations to promote STEM activities and inspire young students.

Following retirement from active duty, Rear Admiral Carr served on several boards as advisor or director, was a Senior Advisor with McKinsey & Co, and Distinguished Visiting Scholar at Stanford.  He joined Leidos as Senior Vice President and Navy Strategic Account Executive in May 2015.

Other News Items of Interest

In Support of Our Members, SENEDIA:

•Enhances the relationships between the local communities, their elected representatives, and the DoD/Federal government organizations