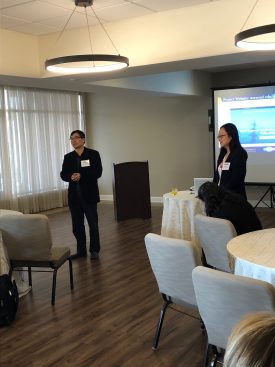 The electrical grid is arguably the most essential infrastructure in modern society since most critical sectors depend on reliable electric supply. As the electrical grid becomes increasingly “smarter”—more integrated with control systems, communication technologies, and computer processing—it has also become more vulnerable to both cyber and physical threats. Furthermore, there is a significant shortage of qualified professionals in the field of cyber-physical security particularly those focused on modernizing the aging electrical grid. Dr. He and Dr. Sun are principals on an ONR Defense University Research-to-Adoption (DURA) project which addresses the grave needs and technical challenges posed in modernizing the electrical grid to enhance reliability, resiliency and security. Since it is well known that a strong workforce can lessen vulnerabilities to critical infrastructure, a major goal of this group is to develop the framework for an educational model to cultivate a sustainable cyber-physical security workforce. For this Tech Talk, Dr. He and Dr. Sun had three primary objectives: (1) to promote awareness of current cyber-physical security facing society as a whole, (2) to present the research being covered under the DURA project, and finally (3) to use this platform to invite local industry representatives to engage in the outreach initiatives being developed to stimulate growth in the cyber-physical security field.

More information on the speakers:

Haibo He (SM’11-F’18) received the B.S. and M.S. degrees in electrical engineering from Huazhong University of Science and Technology, China, in 1999 and 2002, respectively, and the Ph.D. degree in electrical engineering from Ohio University in 2006. He is the Robert Haas Endowed Chair Professor at the Department of Electrical, Computer, and Biomedical Engineering at the University of Rhode Island. He has published 1 sole-author research book (Wiley), edited 1 book (Wiley-IEEE) and 6 conference proceedings (Springer), and authored and co-authored over 300 peer-reviewed journal and conference papers, including several highly cited papers. He served as the General Chair of the IEEE Symposium Series on Computational Intelligence (SSCI 2014). He was a recipient of the IEEE International Conference on Communications Best Paper Award (2014), IEEE Computational Intelligence Society (CIS) Outstanding Early Career Award (2014), National Science Foundation (NSF) CAREER Award (2011), and Providence Business News (PBN) “Rising Star Innovator Award” (2011). Currently, he is the Editor-in-Chief of the IEEE Transactions on Neural Networks and Learning Systems, a premier journal in the field with the latest impact factor of 7.982.

Professor Yan (Lindsay) Sun (F’18) received her B.S. degree with the highest honor from Peking University in 1998, and the Ph.D. degree in electrical and computer engineering from the University of Maryland in 2004. She joined the University of Rhode Island in 2004, where she is currently a professor in the department of Electrical, Computer and Biomedical Engineering. Dr. Sun is the Editor-in-Chief of IEEE SPS SigPort (2015-2017), and an associate editor of IEEE Transactions on Signal and Information Processing over Networks. She was an elected member of the Information Forensics and Security Technical Committee (2014-2016), served on the editorial board of IEEE Security and Privacy Magazine (2013-2015), and was an associate editor of Signal Processing Letter (2013-2015). Dr. Sun was the general chair of IEEE Workshop on Information Forensics and Security (WIFS) in 2014. She was the recipient of NSF CAREER Award (2007), for her work on trust management. Dr. Sun recently received EURASIP 2015 Best Paper Award, for the paper entitled “Securing Collaborative Spectrum Sensing against Untrustworthy Secondary Users in Cognitive Radio Networks”. This is a society-wide award, selected from all journals governed by the European Association for Signal Processing, for proven impact and excellence. She also received the best paper awards at 2014 IEEE International Conference on Communications and at 2010 IEEE International Conference on Social Computing. Dr. Sun recently became an IEEE Fellow in 2018. Dr. Sun’s research interests include cyber-physical system security, trustworthy social computing, power grid security, and network security. Her research features multidisciplinary security solutions, which combine signal processing, cyber security, and online social media. She also contributes to fundamental theories of trust modeling and management.

Other News Items of Interest

SENEDIA Tech Talk: Victory Over and Across Domains

The March 2019 SENEDIA Tech Talk featured Jennifer McArdle, a Non-Resident Fellow at the Center for Strategic and Budgetary Assessments and an Assistant Professor of Cyber Defense at Salve Regina University.  She discussed her recent report:  Victory Over and Across Domains:  Training for ...

March 28, 2013 Associated Press | by Lolita C. Baldor WASHINGTON (AP) — The Pentagon will sharply cut the number of unpaid furlough days civilians will be forced to take over the next several months from 22 to 14, defense officials said Wednesday, reducing the impact of automatic budget cu ...

A  recent news story posted by the Community College of Rhode Island (CCRI) discusses the urgent demand for the emerging, high-demand field in Cybersecurity. Matching curriculum standards to what the NSA recognizes in Cybersecurity is a huge step forward in ensuring the students are best p ...

In Support of Our Members, SENEDIA:

•Enhances the relationships between the local communities, their elected representatives, and the DoD/Federal government organizations